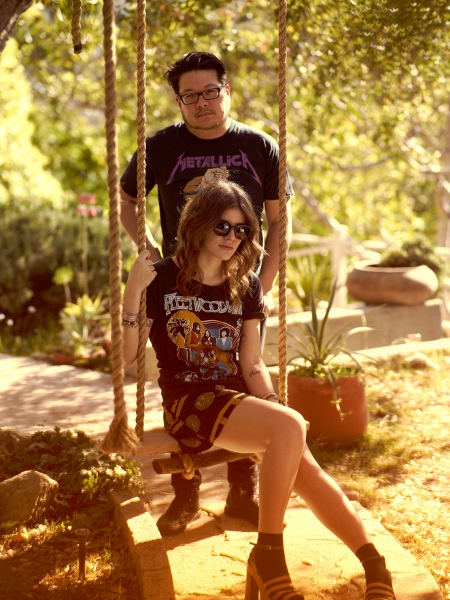 LC: You’ve worked in conjunction with some serious music legends this year, most recently doing that True Blood duet with Iggy Pop [“Let’s Boot and Rally” — scroll down to listen]. Was that a long-distance collaboration or were you in the same room with him? Any other dream collaborations?

BC: Iggy and I did not work in the studio together — he recorded his vocals in Spain and I did my part in L.A. It was really awesome to hear my voice mixed with his. I’ve been a fan since I was a teenager. I’d love to work with anyone in Fleetwood Mac, or Drake. Those are, like, my dream people to work with.

LC: I like your Urban Outfitters clothing line. Was this project your first foray into fashion?

BC: I studied fashion for about six months at Pasadena City College in L.A. I was studying design, but I wanted to be a stylist. I used to make my own clothes when I was a teenager, and my friend and I would sometimes sell them online through livejournal, or even at swap meets occasionally. I have never worked in the industry, but when I was asked if I wanted to work with [Urban Outfitters] to collaborate on a line, I knew I had to do it. I think it’s every girl’s dream to have their own clothing line — it definitely was one of mine.

LC: How would you say the Valley girl look has evolved in the 21st century?

BC: Clueless is a huge influence on the wardrobes of a lot of girls my age. When you grew up in such a cultural time like the ‘90s, it’s hard to lose some of those fashion inspirations. The Valley in the late ‘90s and the early 2000s was such a weird place. I mean, I grew up around kids who all played water polo, so I had to express myself with my style. I think tons of kids all over the Valley are still trying to do that: be expressive with their style while they live in such a landlocked place. ■